The White Princess by Philippa Gregory
My rating: 4 of 5 stars

*Little Spoiler*
The intrigue and the plotting of the court were ever present. Elizabeth of York was either plotting but only in her heart and never acted against her husband the king except to not be completely truthful with him. It was hard to witness the love that Henry had for her and the love that she didn't reciprocate for a long time and then it was dashed because of all the distrust. It was very good, but I was always hoping for Elizabeth to act differently. Obviously, Henry could have acted differently, but she was much better than him in every respect and could have been a help to her husband more. But that is really just the romantic in me because I always want romance to win out. This was a compelling book, and I finished within 18 hours with almost no sleep.

View all my reviews
Posted by Isabelle Joshua at 5:32 PM No comments:

Why not spend time answering these questions instead of studying for the bar? Hope I don't have to shamefully admit all my distraction ended with me failing it...Yikes.

“The Sunshine Blogger Award is a “get to know the writer better” type of blogging exercise, with a couple of rules attached:
Answer all 11 questions asked by the blogger who nominated you.
Nominate eleven bloggers in return and write eleven (possibly fiendish) questions for them to answer.”

Okay so here are my 11 questions for the authors to answer?

Posted by Isabelle Joshua at 2:21 PM No comments:

All of my children have had to attend speech in school. They inherited their mother and father's poor childhood speech delays. Currently, my four-year-old (is absolutely adorable by the way) makes many incorrect speech pronunciations. My favorite is "I'm just killing mommy." I repeat it back to her "killing," and she shakes her head, "No, mommy I said kid-DDing."

I correct her at times but others I let go because I love it. I love the mistakes, the mispronounciation of words, the way an adult phrase sounds coming out her little sweet mouth. She astounds me with the little sayings and things she says. I know I'm gushing because she's my last. She will be the last child of mine that I can reveille in the "lup, mommy" instead of "yup."  I make video recordings of her and my others when they comply so I can capture their cute innocence while it lasts.

She is also a chatty Cathy; this little girl talks to everyone and nonstop. I spend most days with her all day while the other kids are in grade school, so I do my best to engage but many times I find myself asking her, "Can you play the quiet game?" (with herself) and she gladly responds, "Yes, mommy I'll be a sneaky ninja." She kills me with her cuteness. My husband jokes that I'm partial, but I know I'm not, it is just that she's the last, and she's at that adorable age of four that all of my children went through, and you just want to eat them up because they're precious.

I just came across a video of my older daughter that is now six-years-old. In the video, she was four. She is just as adorable as my current four-year-old. She was telling me about why she doesn't like to sweat and get yucky. It is also so fitting that my youngest was talking in the background nonstop even then and eventually started yelling because I wasn't paying attention to her as I was filming my older daughter. Not much has changed...
Posted by Isabelle Joshua at 2:04 AM No comments:

Email ThisBlogThis!Share to TwitterShare to FacebookShare to Pinterest
Labels: Family

Have you ever experienced a reading slump? I am in one right now. Because of my personal obligations, I can't be reading every day like I normally do and it won't let up until August. But when I have read a book it's just been okay or "eh" and I want to fall in love with a book. I've tried some authors that I loved in the past and the current books just wasn't as great. I know that this happens but if you read my reviews there have been like five books in a row that I gave a 3-star to and that's a low score for me. That means I got through it, and it was okay. If I can't get through it which happens on occasion, I'll give it a one or two stars and I'll rant about why I didn't like it. So I've had to go back and re-read some of my favorite books to get through this reading slump.

I also have times of a writing slump when I just don't want to write, or I am bored with the story, usually because I want it to be done. I get somewhat impatient with writing, and I speed through and write lots for a week or two then don't touch it again for a few more weeks.

Right now, I just feel blah because I'm not able to do what I want but rather have to finish some obligations that take almost all of my time.  The obligations are taxing, and I don't feel good about the situation, but they must be done. So I must get back to it as I've spent the last few minutes writing this on an unscheduled break.
Posted by Isabelle Joshua at 3:27 PM No comments:

Outlander by Diana Gabaldon
My rating: 5 of 5 stars

Could I love a book more? Maybe, it wasn't perfect, but it was so close. The dialog, the witty remarks, the hot and sexy Jamie Fraser. The book started out slow for me until she crossed over, but I can also see it as a good practical reason to believe that she wouldn't go back because she while she loved Frank, there was something missing and lacking in the relationship.

It kept me on my toes when she was in 1743 because I didn't really know anything about the book before reading it. I saw the cover with her wrapped in Jamie's flannel of his kilt, and I thought I want to read this. I did read a few reviews to give me an idea, and that's the only way I knew that she would time travel, but I kept waiting for the moment to arrive and wanted it to because as I said before that the beginning was slow for me. She also did a great job of hiding who the love interest would be because she kept referring to him as a young lad or something like that.

The dialog with the Scots was great, and I love how witty and sweet Jamie is. Clare's vehemence at times was a little dramatic, especially saying "Jesus H. Roosevelt Christ." But on the whole, I loved it and despite the slowness of the first 40-50 pages, the rest of the over 700-page book was fantastic!

View all my reviews
Posted by Isabelle Joshua at 10:26 AM No comments:

I am a procrastinator. This is not surprising to my many friends and family but the extent of it may be. I just finished law school and I have to start studying for the bar. I have to find a part-time or full-time job after I take the bar and then I need to find legal employment after I become a lawyer.

I want to sit at home and be on the computer, reading, writing, watching, and listening. To anything but not reading job posts, writing my resume, watching videos about job interviewing skills and especially not listening to experts tell me what I need to do to get a job.

This will be a difficult next few months...

Posted by Isabelle Joshua at 10:43 AM No comments: 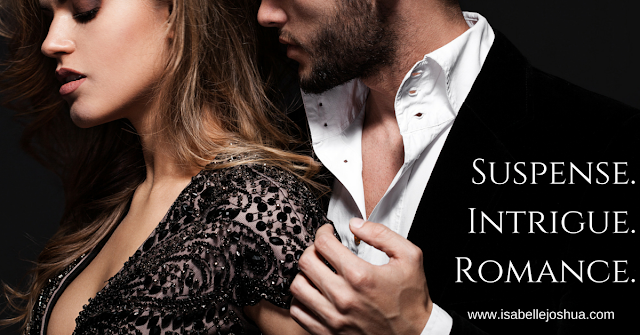 Follow the link to enter to win 1 of 2 copies of The Swallow.

Ends tomorrow, June 13th.
Posted by Isabelle Joshua at 10:42 AM No comments:

Email ThisBlogThis!Share to TwitterShare to FacebookShare to Pinterest
Labels: Giveaway 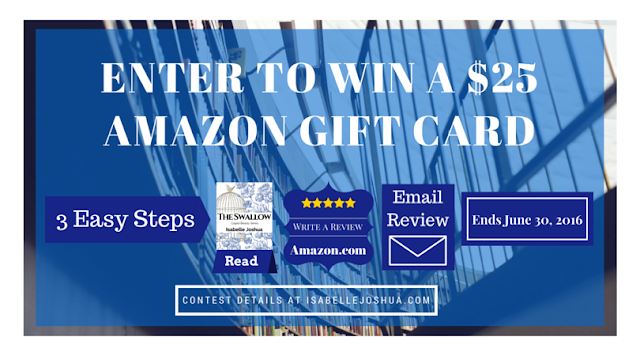 Posted by Isabelle Joshua at 10:35 AM No comments: