The Pursuit by Janet Evanovich
My rating: 5 of 5 stars

Once again, I love this Fox and O'Hare book. The cliffhanger is quickly resolved and the romance between them that we've been anxiously wanted to happen finally does. O'Hare's morals and personal convictions are tested more and more. The book has funny and sweet moments and great action. I can't wait for the next one. Nicholas Fox might be the best criminal for O'Hare!

View all my reviews
Posted by Isabelle Joshua at 9:26 AM No comments: 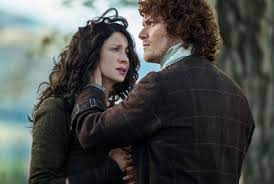 I just watched the finale of my favorite show, Outlander. I cried buckets and immediately rewatched a pivotal scene that was simultaneously sweet and heart-wrenching. All the episodes have become a favorite of mine to rewatch. I bought them immediately and plan to rewatch them just like I do with Pride and Prejudice, Emma, Gone With The Wind, and so many other wonderful love stories and great epic stories that drag me into the story.

I know other Outlander fans will probably disagree, but I wasn't crazy about Sophie Skelton as Brianna. Maybe her portrayal will improve but then again even when I read Dragonfly in Amber, I wanted to skip ahead so I could read about Claire and Jaime. I am not as fascinated with Brianna and Roger as so many others are. I like that they have a romance, but the first part of each of Diana's books starts off slow for me and until Claire either goes through the stones or starts telling about Jaime again, I am just itching to get past what I am currently reading and get to "the good stuff." 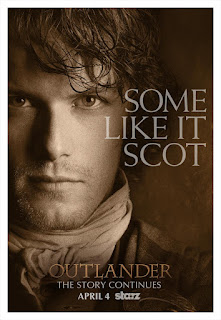 When I first read Outlander, I had no idea what to think because I knew nothing about the book. All I saw was this good looking dirty redheaded guy holding a beautiful brunette, and I was interested. I've always been a sucker for romance. But I did read part of a review, and it gave me an idea that she travels in time and meet someone so while I was reading the first 100 pages or so, I was chomping at the bit to get to the part when she crossed over the stones. I was very bored with her life or the vacation with Frank and later I could understand why Jaime would be the love of her life and the life she lived with him was more appealing than the one she did with Frank, he was boring. Yes, he loved her, and he was sweet, but he was condescending and arrogant. I didn't get the impression that she was on equal footing with Frank in their relationship. But with Jaime, she was, and he loved her so much. Diana did such a good job of holding out who the love interest would be though when she first crosses over, or I'm an idiot because Claire didn't make it clear immediately that she thought Jaime was attractive, and she talked about him as a boy or young man.

But it changed, and the slow romance and her feelings grew for him, and then to realize that he had loved her all along and only due to pride and the situation they were in at the time of their marriage did he hold back from telling her. Talk about great story telling.

I long to write a character like Jaime. Maybe one day I will.
Posted by Isabelle Joshua at 1:08 AM No comments:

Call Me Irresistible by Susan Elizabeth Phillips
My rating: 5 of 5 stars

I just re-read this I think for the 3rd time and each time I love it. I love Meg's character and her spunk and she isn't intimidated or scared of any of them. She speaks her mind and is honest. Ted at first is such a jerk to her but it is funny because he makes things so difficult for Meg. I think my favorite part is the when she is his caddy for the first time and all the mistakes she makes. Meg stayed true to herself and became the successful, independent women she was always meant to be as well as bagging the hottie that is a sweetheart. It cracks me up that Ted hasn't experienced anyone that isn't smitten with him when he meets Meg. Funny and sweet and hot book. One of my favorites.

View all my reviews
Posted by Isabelle Joshua at 9:40 AM No comments: