The First Family Detail: Secret Service Agents Reveal the Hidden Lives of the Presidents by Ronald Kessler
My rating: 4 of 5 stars

Interesting stories and information. Reading for research purposes and it is helpful.

View all my reviews
Posted by Isabelle Joshua at 9:28 AM No comments:

Shatter Me by Tahereh Mafi
My rating: 5 of 5 stars

Her writing is like poetry! And it is beautiful and vast. I forget in YA that the characters are only 17 or so and the speech patterns and communication style is so different from what I prefer that I at first felt like the dialog was stiff and unnatural, but after reflection I realize it is true to the age group. I loved this book and I devoured it in a day and continued with the series. Beautiful cover and beautiful prose. I am not going to lie and say that there aren't plenty of "I'm dead and no one else knows it but me" because male characters touched her, kissed her or spoke to her in a beautiful manner, but it doesn't matter, it was still good.

View all my reviews
Posted by Isabelle Joshua at 11:53 AM No comments:

I was caught by the beautiful designs on the book, which is not uncommon. I am definitely a judger of books by their cover. So I had this book on my list of to-read for quite a while and since I am taking a break from the enormous Diana Gabaldon's Outlander series and wanted a quick good read, I finally started Shatter Me by Tahereh Mafi and I was not disappointed.

For the last couple of months, besides re-reading some old favorite books and the Outlander series I have been unimpressed with the string of books I had been reading. Until Shatter Me.

I continue to be astounded with Mafi's ability to come up with so many metaphors.  It makes me feel like my writing is unimaginative, but I know it is a completely different genre. This is YA and mine is contemporary romance.

Only in YA you can get away from spending a whole chapter making out (kissing and groping) and the readers love it (including me).  I suggest you go out and read the whole 5 book series, like I did (maybe not in the span of 4 days, but that's what I like to do).

One of my favorite lines:  “I'm oxygen and he's dying to breathe.”
― Tahereh Mafi, Shatter Me

This ranks as one of my favorite YA dystopian series along with Divergent and The Selection.

And the covers are magnificient! 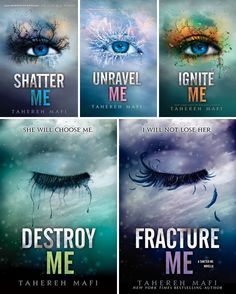 Posted by Isabelle Joshua at 11:46 AM No comments:

Ignite Me by Tahereh Mafi
My rating: 5 of 5 stars

Soo soo soo good and I love the time she spent on the characters getting to know each other and building trust. I was completely Team Warner almost from the first book because I have a writer's sixth sense about the character that will win the love triangle plus I love Warner's complex character. The only thing I would have really loved was one or two more chapters or an Epilogue. Otherwise, it was great and I can't wait to re-read it again!

View all my reviews
Posted by Isabelle Joshua at 11:36 AM No comments:

Unravel Me by Tahereh Mafi
My rating: 5 of 5 stars

I really liked this book and it was such a great 2nd book, it pulled me in even more to her story. Now I will admit Juliette is whiny and the dialog is so irritating at times but really it is true to the age of the characters as I have a 17-year-old myself and the communication skills of this age is astoundingly poor. But the writing is not, she continues to write Juliette's voice like poetry. The additional characters were good and the similarities to the X-men was welcome because I really like Superhero films. There is an amazing chapter towards the end that give a glimpse into the relationship that I am rooting for. I recommend the whole series and the two novellas that accompany it. Very good story.

View all my reviews
Posted by Isabelle Joshua at 11:33 AM No comments:

Review: A Breath of Snow and Ashes

A Breath of Snow and Ashes by Diana Gabaldon
My rating: 4 of 5 stars

So much happened and was resolved

It was a long long book , but full of so much adventure and trying up of storylines from earlier books.

View all my reviews
Posted by Isabelle Joshua at 2:37 PM No comments:

The Crown by Kiera Cass
My rating: 3 of 5 stars

It has been awhile between Selection books but I just didn't connect or really like the Princess. I thought she was shallow and I found myself feeling like the dialog was immature and stiff. I hate to compare it to the original but this wasn't as good as the first three books.

View all my reviews
Posted by Isabelle Joshua at 2:36 PM No comments:

Drums of Autumn by Diana Gabaldon
My rating: 4 of 5 stars

A very good book and continuation of Jaime and Claire's story

The point of view changes and dates were at times hard to keep straight. It was in Claire's 1 st person POV but also 3rd person for Jaime, Roger, Brianna and possible others. very interesting story that keep me wanting to read and know what happens next.

View all my reviews
Posted by Isabelle Joshua at 2:35 PM No comments:

Bennett by Seraphina Donavan
My rating: 4 of 5 stars

The writing was good and the storyline was interesting. I've never read this author before and I will check out her other books as a result. It was a fast read and the characters were believable. I just saw two or three copy errors, but nothing too glaring.

View all my reviews
Posted by Isabelle Joshua at 2:34 PM No comments:

After spending the last three months studying for the Texas Bar Exam, I finally have time to do some writing and reading.  I won't know my results until early November and in the meantime, I will be looking for a job as well as spending time with my kiddos before school starts in late August.  I realize that I haven't been on here in about a month despite having the last fifteen days off.  I have read about five books and swam a lot.

Now, I am spending some serious time on the sequel and smaller book in the Caged Beauty Series. Instead of writing the sequel and then writing one of the smaller books, I have been writing them concurrently.   Since they deal with a similar timeline of events, the larger book is from the perspective of Kathryn and the smaller book is from Alex's POV. I find it interesting to write from a male perspective, and I hope to humanize Alex so that he is still considered great but less perfect and has some depth of character as he deals with the situation he is in.

I had some moments in The Swallow that Alex was jealous and got angry when Kathryn explained about her relationship with Evan, but some beta-readers said he was too angry. So I toned it down some, and although I love him in the book, he does seem wonderful, but it is really from Kathryn's POV, and she is smitten with him from their first meeting.

But I've written a considerable amount in each book that I am contemplating putting them together and using both POV. There are other books that I've read that have done this, and I personally like it in a secondary book, but I struggle with deciding if the reader will want to read the Alex's POV after or before.

I wonder about the first book being from just Kathryn's POV and then switching it up in the 2nd book. I know it has been done by other successfully, but I need to figure out if I should keep them separate or merge the two story.

Together they are roughly the size of the first book, but I am not finished writing The Bluebird, which is the second book in the series. I know that other series are usually three books, but at this point, I can't see dragging it out much longer. The Swallow was originally written as one book, and I broke it up because I changed the story dramatically to add more conflict. It got boring for me, and I just didn't see getting it all in one book any longer.

Anyway, I will try to update more frequently as I write and read. Enjoy the rest of your summer and keep reading!

Posted by Isabelle Joshua at 2:20 PM No comments: